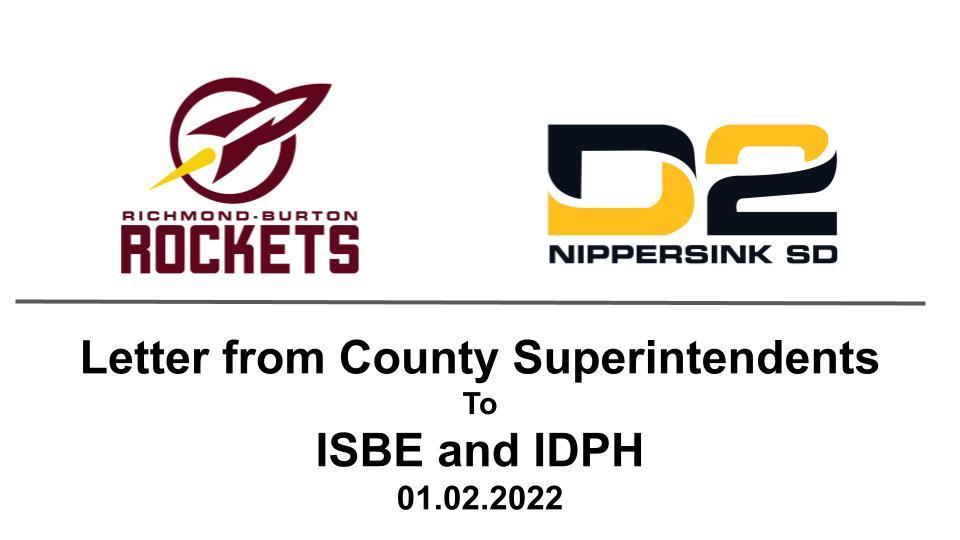 Letter to IDPH and ISBE

We are writing seeking an explanation for the ISBE and the IDPH’s latest decision to adopt the CDC’s newest recommendations for isolation and quarantine for the “general public” but carving public schools out as not being included in the “general public”. Throughout the pandemic, the guidelines for schools have been consistently more restrictive and schools have been one of the only areas held to high levels of accountability for implementing and/or penalty for not following mitigation measures.

We acknowledge and understand that the majority of students had not been eligible for the vaccine until recently, which drove some of the previous recommendations; however, not allowing the new CDC recommendations to apply to the adults in school districts does not make sense. In fact, it appears to be discriminatory against adults who have chosen to work in public schools. What scientific evidence demonstrates and/or supports that COVID treats and/or profiles public school employees differently than those who work in other environments and/or professions? When releasing the new guidelines, the CDC explained that the period of contagion and spread is lessened with Omicron, the now dominant variant. By not allowing public school employees to have a shortened isolation/quarantine period, are we assuming that adults who work in the public schools either are not contracting Omicron or somehow don’t have the same pattern of contagion and spread as adults who are in the “general public”? Can we see the evidence that supports this difference in treatment?

Public schools operate and interact within the general public and house a significant portion of their communities’ population in schools each day. All year schools have operated implementing the mitigation measures with very few outbreaks requiring schools to revert to adaptive pauses/remote learning on a broad scale. What scientific evidence is out there to show that we can’t adopt the new guidelines from the CDC as other states have for schools?

We understand that the school guidance has been “under review” for weeks, if not months. For example, we started asking our local health department about whether we could have the roof vents open on buses instead of the windows for ventilation back in November. However, the only answer we have been given is that IDPH was “looking over” all guidance.  It’s been 2 months now since we started asking that question with no answer or timeline for an answer provided.

The lack of clarity, consistency and logic in guidance for schools has caused - now with the latest carve-out for public schools with the adoption of the CDC guidance will continue to cause - disruption, division, and divisiveness in communities across the state. The perceived lack of priority and/or urgency for school guidance that allows us to operate in tandem with society (general public) is dumbfounding.  Having schools operate on different guidance for isolation and quarantine will contribute to the following issues:

We ask that you immediately release any changes to the school guidance for schools and/or adopt the CDC guidance for all settings removing any discrimination based on environment and/or place of employment. Maintaining the status quo is doing an injustice to every community in Illinois. We cannot keep one set of standards in place for the general public and another for schools.